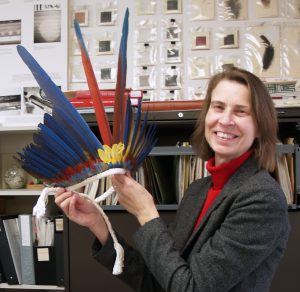 Carole Dignard graduated from Queen’s University with a Master’s of Art Conservation, Objects (1986), and was a Getty Fellow at the Peabody Museum of Archaeology and Anthropology, Harvard University, before joining the Canadian Conservation Institute’s (CCI’s) Objects Laboratory in 1988. She is experienced in the care and treatment of objects, in particular those made of skin, leather, fur, feathers, quills, beadwork and basketry. Throughout her career she has carried out and published research and treatment development projects on various topics including ultrasonic misting, laser cleaning, adhesive treatments for leathers and skins, iron-catalysed degradation of natural polymers, birchbark solvent vapour reshaping treatments, and fading of natural colorants. She has presented lectures widely at various professional conferences.

She has also contributed to the field of preventive conservation, notably by co-developing and co-delivering CCI Museum Mount-making workshop over 40 times throughout Canada and even abroad. She is co-author of the CCI book on the subject, with an augmented, revised 3rd edition planned for 2022. As well, she was the Coordinator and Technical Editor of the CCI web-series Preventive Conservation Guidelines for Collections, and was co-recipient of the CMA award honoring this publication series when it was launched on the CCI website in 2018. Within this series she co-authored Caring for leather, skin and fur, Caring for feathers, quills, horn and other keratinous materials, and Caring for metal objects.

Carole has been involved in organizing international conferences, including as Program Co-Chair of Leather 2019: 11th Interim Meeting of the ICOM-CC Leather and Relate Materials Working Group; Program committee member for CCI’s Symposium 2011 on Adhesives; Program Co-Chair of the Forum on the Conservation of Thangkas during the ICOM-CC 15th Triennial Conference, New Delhi, India, September 26, 2008; and Program Chair of the 2007 CCI symposium Preserving Aboriginal Heritage: Technical and Traditional Approaches.

On the national scene, Carole was Journal of CAC co-editor from 2003 to 2011, chaired the 3rd edition Code of Ethics Review Committee (1998-2000), was Secretary in 1990-92 and Councillor for a term towards the end of that decade. She edited and produced the first IIC-CG Directory of Members in 1989, and produced the joint CAC-CAPC outreach brochure ‘What is Conservation/Profession: Restaurateur’ in 1995-97. She was an accredited member of the Canadian Association of Professional Conservators (CAPC) from 1993 to 2015 and chaired on their board as Secretary in 1993-95.

Throughout her career Carole has been involved within the CCI as well as with professional associations (CAC, CAPC and AIC) in producing quality French translations. She was Translation Coordinator for the organizing committee of the IIC 1994 Congress Preventive Conservation: Practice, Theory, Research. She presided the IIC-CG/CAC translation committee in the mid 1980s to early 1990s, which included chairing the translation of the Code of ethics, 2nd edition (1989) and its Glossary. She has been a member of the J.AIC French abstract translation committee since 1997.